Just wanted to stop in and give you all an update on the ankle...Then I'm going to stop talking about it!  LOL!

I came home early from market as I was able to get a doctor's appointment today.  On the way up to Dallas, it didn't stop me from going to the Bakery in West!Look at that happy face!  Anything for bakery goods! 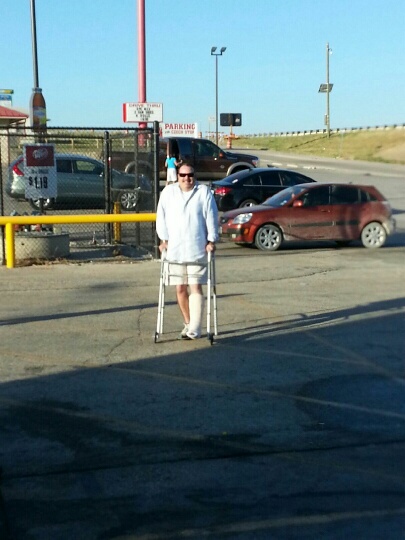 Then it was off to market...I do miss the motorized scooter that I had when I was there.  You talk about fun!  This is the ticket!  Then it was back home... 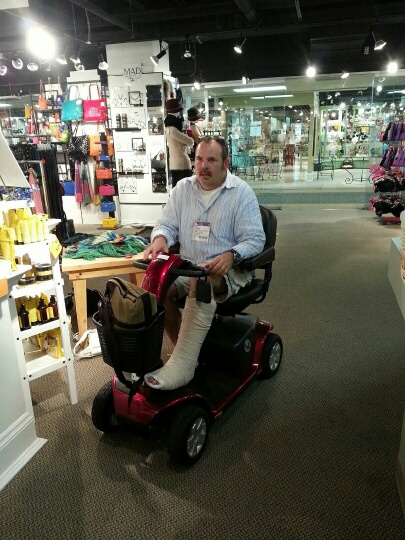 Now on with the story...

I went to the Orthopedic Doc today.  Several rounds of good news.  The best of course was that I needed no surgery.  I honestly didn't even know this was a possibility.  The Doc said that little zinger before he left the room to go look at my X-ray.  I had visions of hot knives, sterile gowns and hospital beds with me in traction for a second...could have been the painkillers....THEN, He came back and said, "Nope, no surgery.... a boot it is."  The cold sweat resided...

It was so amazing to get the big heavy plaster splint off!  I was a bit swollen but who cares!  It was off!  For a second anyway!  Can you say pigs in a blanket! 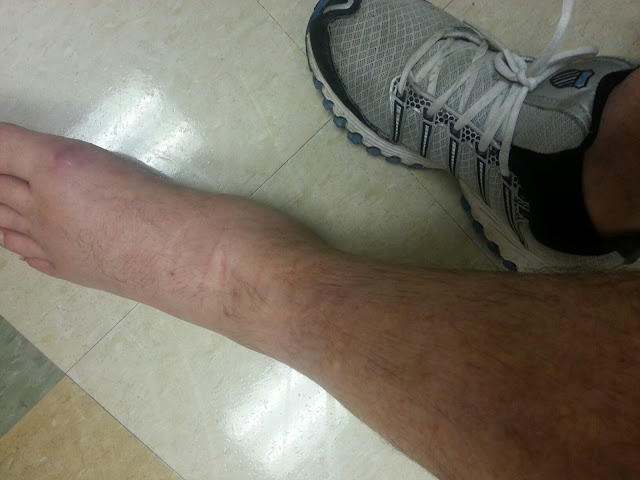 The Aircast or Air Boot...  The good thing about the boot is that I can take it off to shower, etc.  For me, it's a way to escape...just in case. Mild case of Claustrophobia me thinks... I swear I was going for the Tim Holtz Tonic Shears a couple of nights ago!  If they had been next to my bed the deed would have been done.  However, crawling across my living room floor to the studio with one leg up in the air behind me and my tummy acting as a "FLOATATION" device, just sounded too exhausting...so I sat with my thoughts singing Kumbaya softly in the night..,LOL!-

Oh back to the air-boot.  This sucker has more Velcro on it than the Velcro kingdom in Velcroland!  Ahhh, I have a thought,....I can upcycle the Velcro when I get this puppy off.  I'll have enough Velcro to projects for YEARS! :)   Once this humongous instrument of supposed self healing is applied, you can pump the blue thing up to add more pressure.  Whatever! 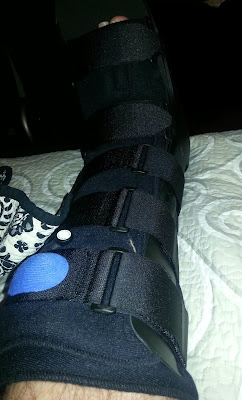 So, looks like six weeks in this contraption.  Doc says to put no weight on it yet, but that will surely come later.  I'm really very happy that I have this boot.  I would rather have this than a fiberglass cast in the 104 degree hot humid Texas Summertime!

Now for the fun....For my mobility issues....THE KNEE WALKER!  I LOVE THIS THING!  It's like a scaled down 10 speed bike! I've been zipping through this house like a mad man!  It even has brakes and a handy dandy little pouch to hold stuff on the go...Still trying to figure out how to put a cup holder on it for coffee...Then it will be perfecto!  Honestly, think I need to go to Home Depot and rig that up somehow.  I am so grateful to have this.  I've really had a time with the crutches, walker and wheelchair...This seems to be the key along with the crutches and walker. 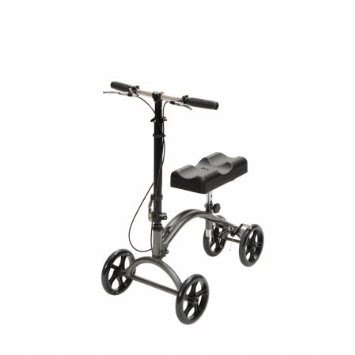 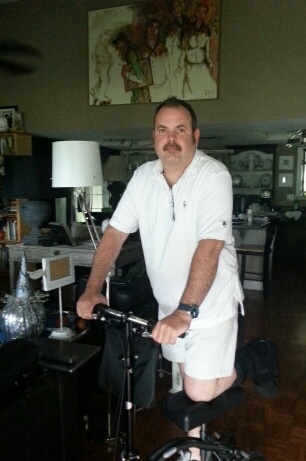 You can even get this thing going fast enough you can take your right leg off the floor and cruise from the living room right into the bedroom!  Too cool!  LOL!

Well, that's it from here.  Doing just fine and feeling so much better than yesterday!  My spirits have been lifted!  Yay!

Have an amazing day y'all!