Would you believe that I went to bed at 9 p.m. and slept until 7a.m. I feel so much better, but not going to push the envelope today...Just took my shirts to the cleaners for one day service and I'm back in bed blogging! I'll be off to Dallas at the crack...By The Way, the crack is anything before 7 a.m. to me! LOL! Actually we leave at 6 and need to be on I-35 by 6:30 a.m. Our first appointment is at 9:00 a.m. Run to the hotel drop the bags and walk over. OK, enough about that...So I'm feeling better...

I think what I'm going to do today is post several times. One post for projects, one post of all the wonderful people I met and one post for all the cool papers and projects....so watch those inboxes! LOL

I was like a proud papa looking for his children when I hit the Sizzix/Ranger/ and Idea-ology booths on Saturday.  I cannot even begin to tell you what an honor it was!  So cool!  I had two projects in the Idea-ology booth, three projects in the Sizzix booth and a tag, the Designer's Challenge and the bus in the Ranger booth.  So cool again!  I'm sorry I can't help it!  COOL COOL COOL!  OK, I got that out of my system... shall we continue...LOL!

As most of you have seen by now, the Eiffel Tower was the first project out of the bag for Tim.  It was a fun project to do...The hard part was to try and get the two bottom parts to lean just enough to begin the tower construction.   Once that was done, It was really an easy project. 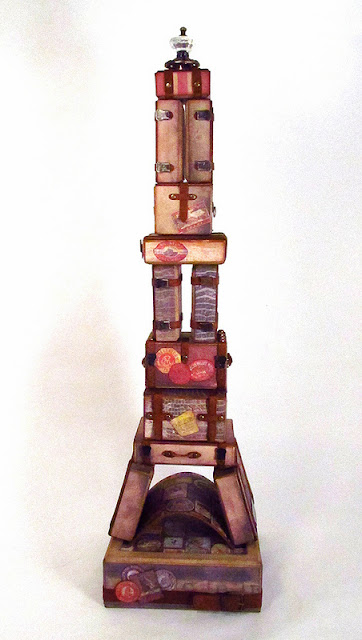 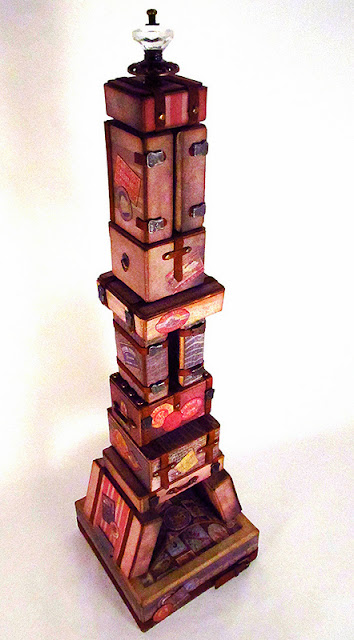 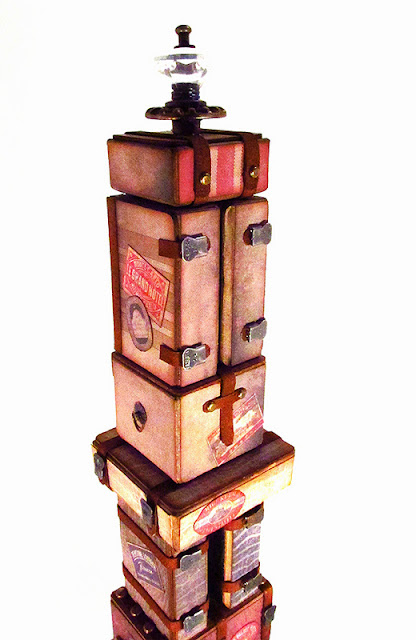 The Original plan was to have several of the suitcases open at various levels.  But we all came to the conclusion that with it being handled at CHA it may get damaged.  So I made a mini for the base of the box.  For the life of me I cannot find the picture of the mini!  However, I did snap some of the tags that went in the mini that my amazing Friend Barb did for it! 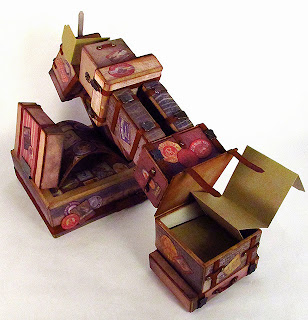 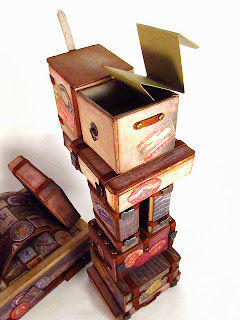 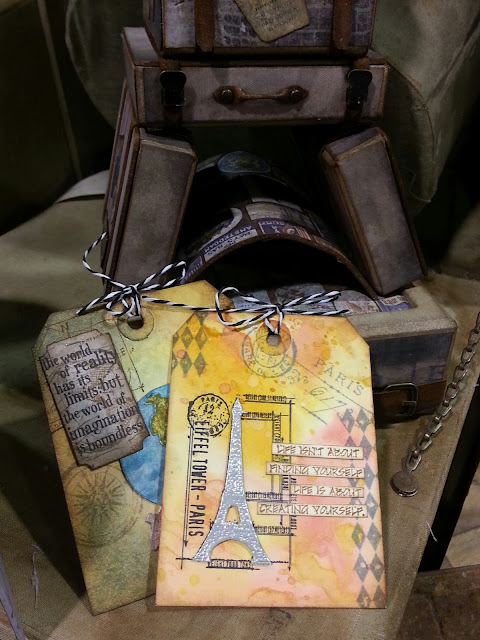 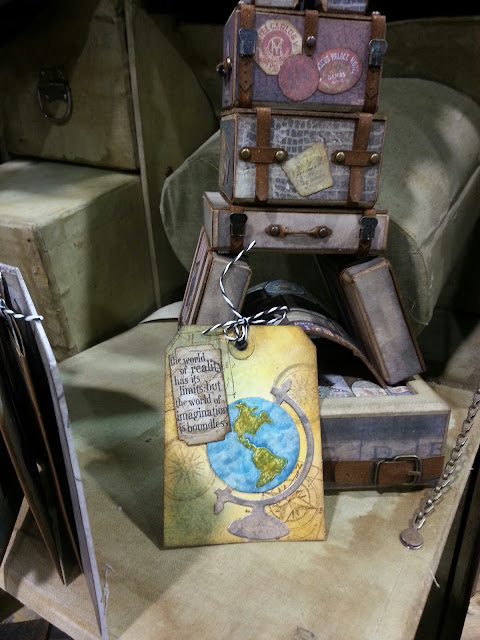 The Second Project in the Idea-ology Booth...The Gent's S.P. Clock.  I wanted to make the clock functional.  Obviously, because it didn't have guts, I wanted to give it some.  If it was a functioning clock, I would have taken the clock works out!  LOL  Go figure!  I placed a round mini in the back of the clock and made a new door so it would stay closed.  I sooooo LOVE LOVE LOVE this new Idea-ology piece!  I think it's one of my favorites and can't wait to get some more of these to play with! 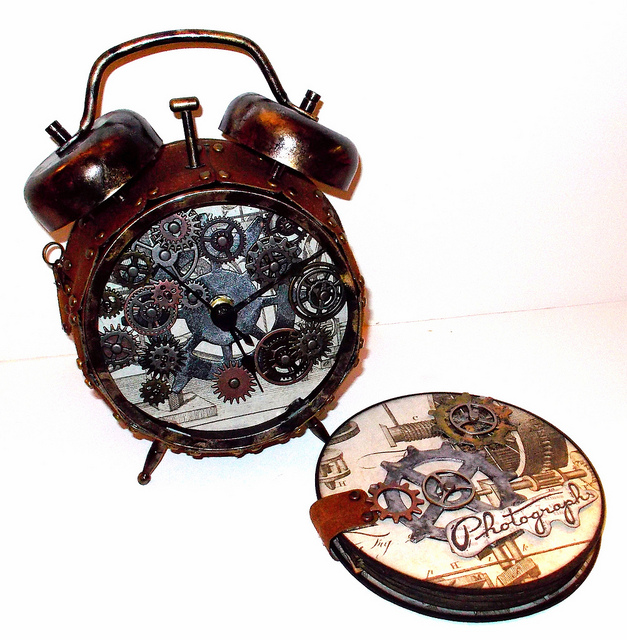 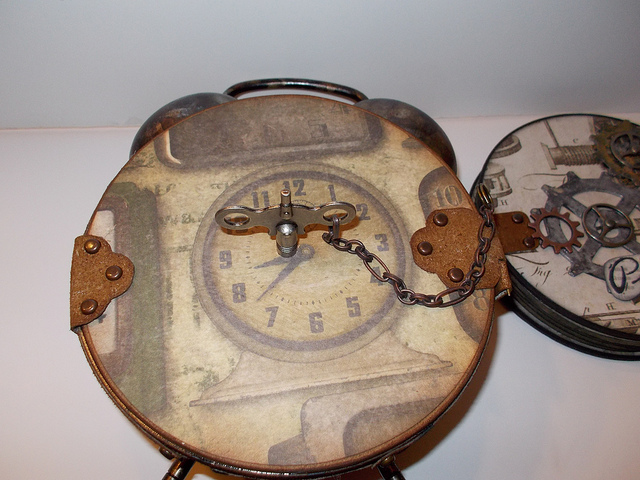 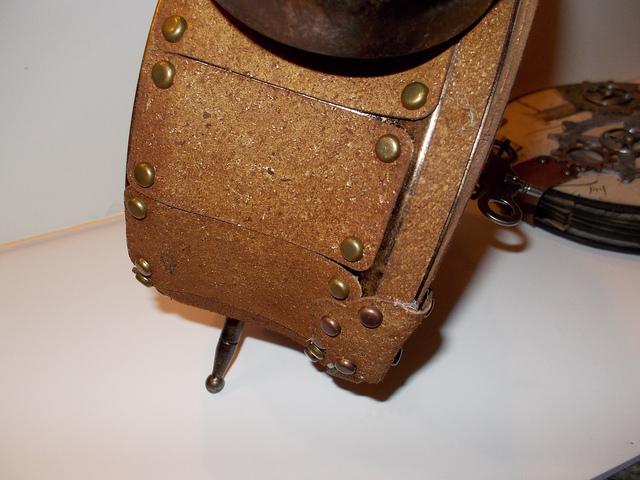 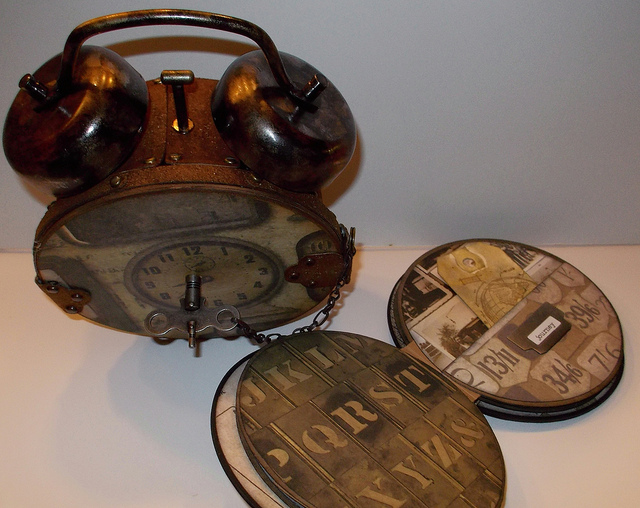 Yes, I did make a tag...LOL!  It was from the new the Stampers Anonymous Tim Holtz Collection, Industrial Blueprint.... 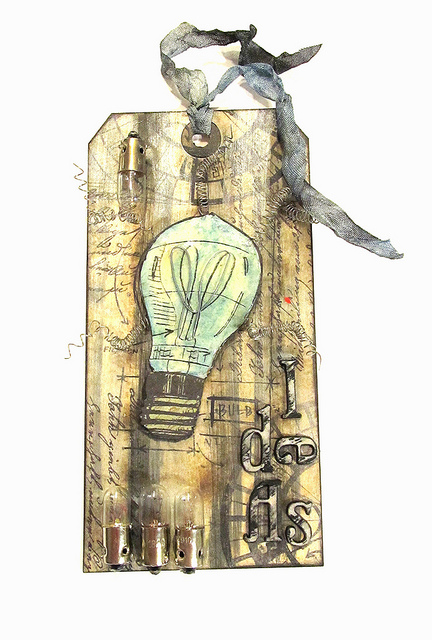 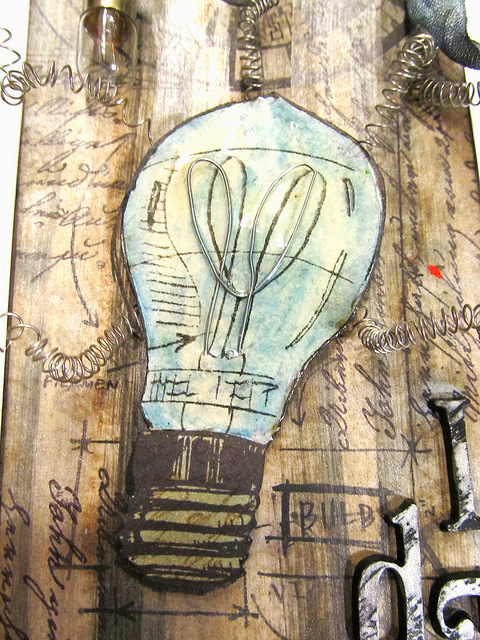 Then there was the Ranger Designer Challenge.  Oh my gosh!  I cannot tell you how many canvases of backgrounds I went through!  The challenge was to use the color Dyan sent to you...mine...Purple!  A color I rarely use in anything I do...Kinda like Pink....(I have a new found love for these colors.)  I just was never happy with any of them.  Then there was the Skype with Dyan, where she said, "Grow up, Go with something and make it you!"  LOL  So I did!

I do believe this challenge truly challenged me...Using only purple, white and black!  WOW! 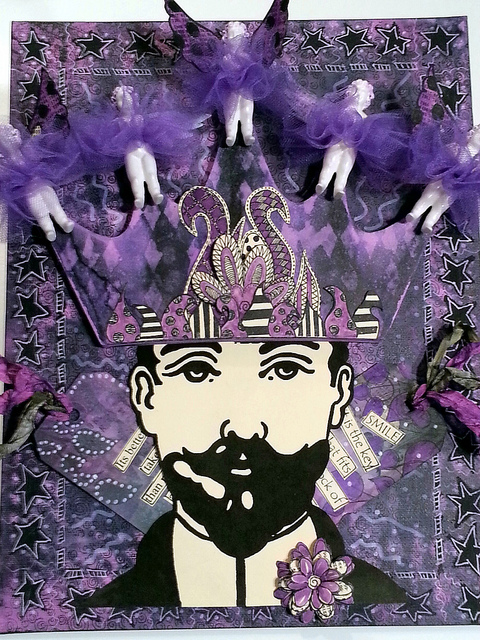 You all have seen the bus so many times I won't show it again.  But Dyan was so kind to show it off for me!  So grateful to her.  That was so sweet.

Man, I could have died and gone to heaven in the Sizzix booth!  So many cool new dies from everyone!  I was just enchanted!  So may cool projects and cards over here!  WOW!  Now, it doesn't have one Sizzix cut on it, but it looked great over there.

OK, first up.  My favorite project for CHA and one that I will teach at the Crafty Scrapper in Waxahachie this summer...Believe it on not this was the fastest project to make out of all the projects!  The top part is the new Tim Holtz Configuration Book Box (Love it!), on top of a chipboard base. 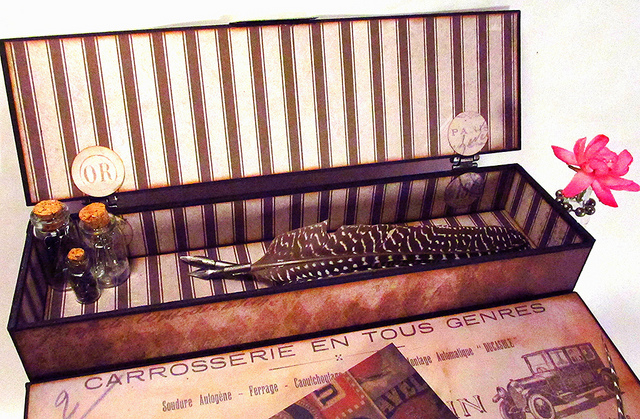 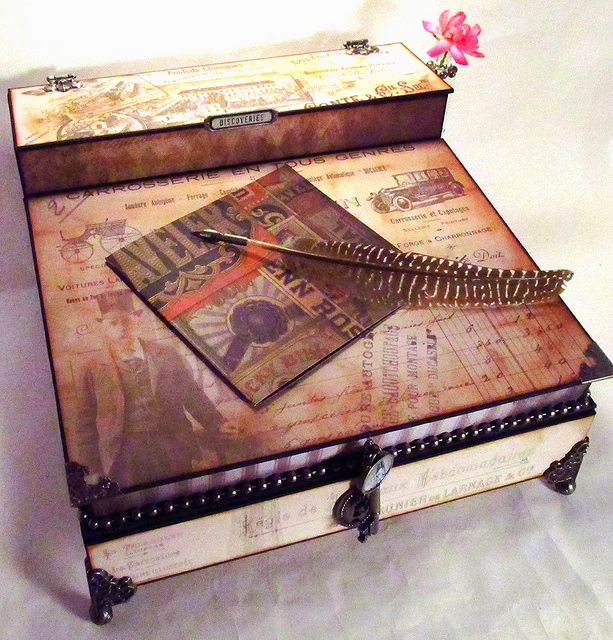 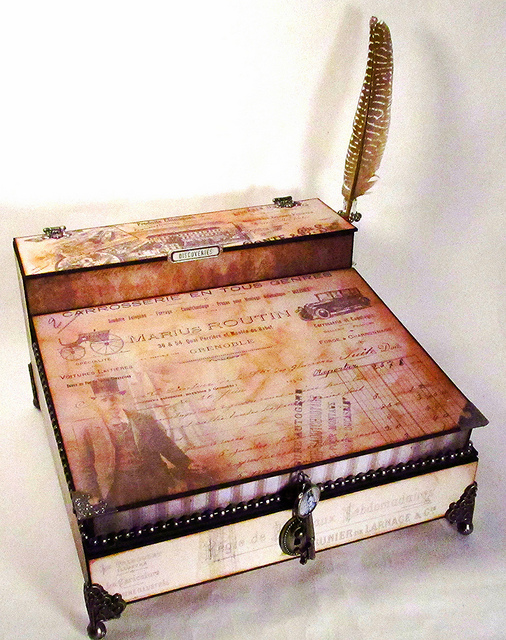 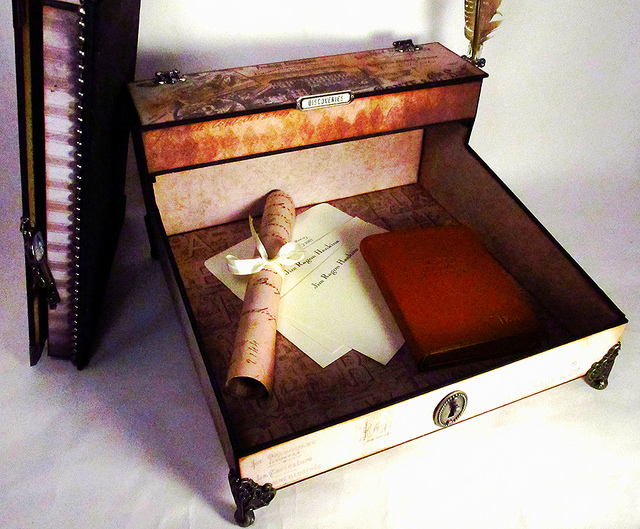 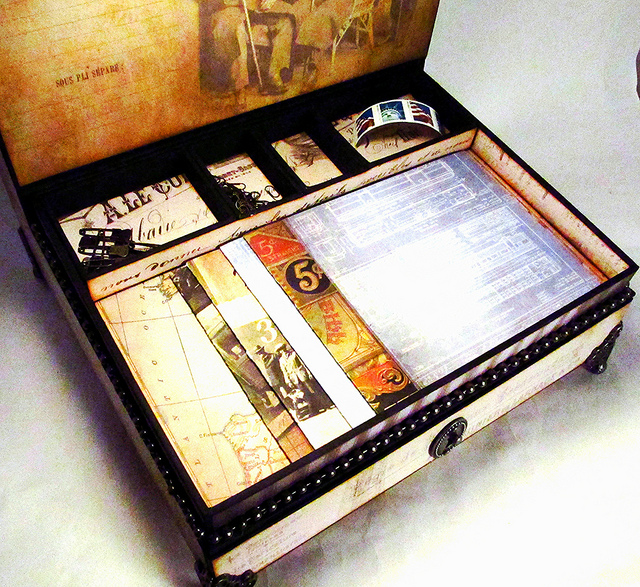 Another piece in the Sizzix Booth was Tim's new Burlap Panel.  Unfortunately, I don't have any of the pictures after the revamp.  I took off the Idea-ology Cash Keys that spelled out Paris and added an on the edge Fleur de lis die at the bottom. 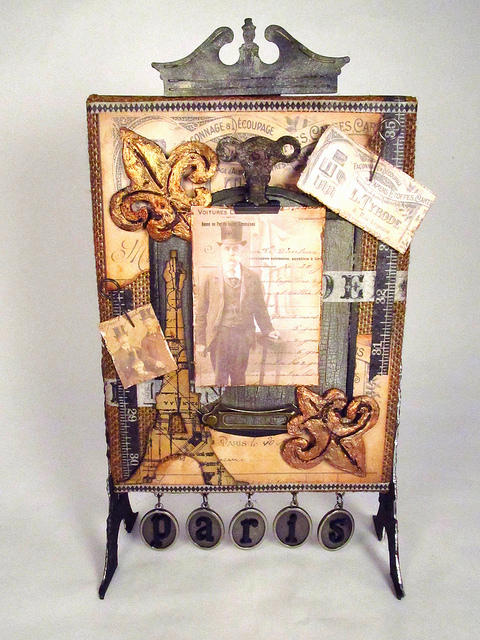 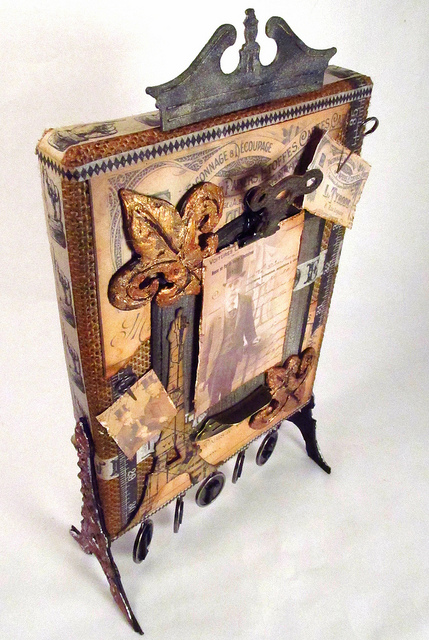 Then there was the Stereo-Scope!  I cannot tell you how many times this was in the trash!  I pulled it out and threw it away and pulled it out again!  The lesson learned here...well in all my projects....When making projects for CHA, make sure you use TONS of glue!  About half way into the first day, one of the lenses made from a pocket watch die had come off and was amiss the rest of the show!  Lesson learned! 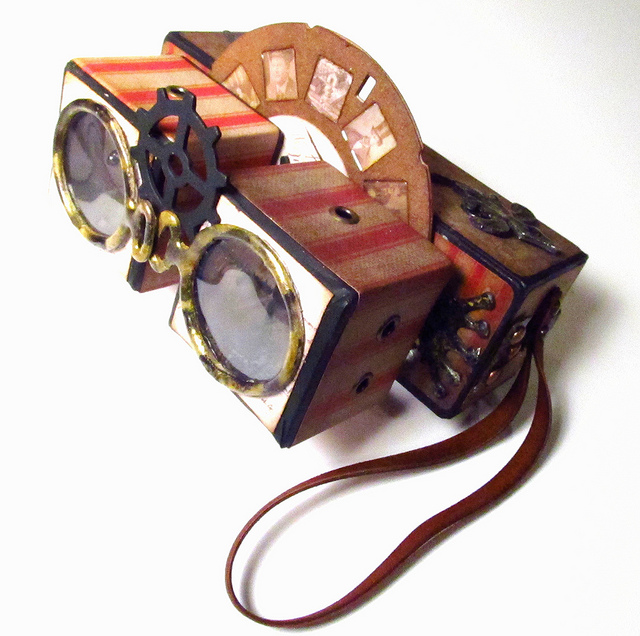 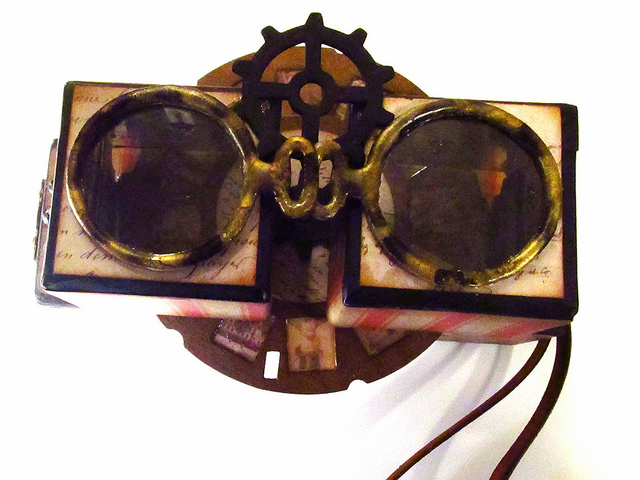 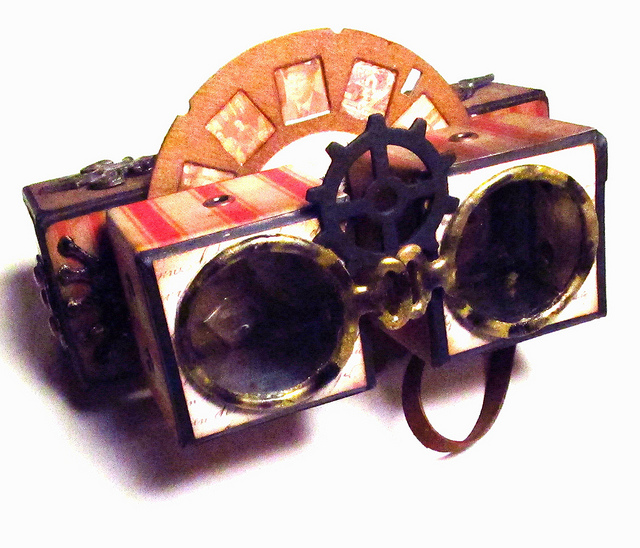 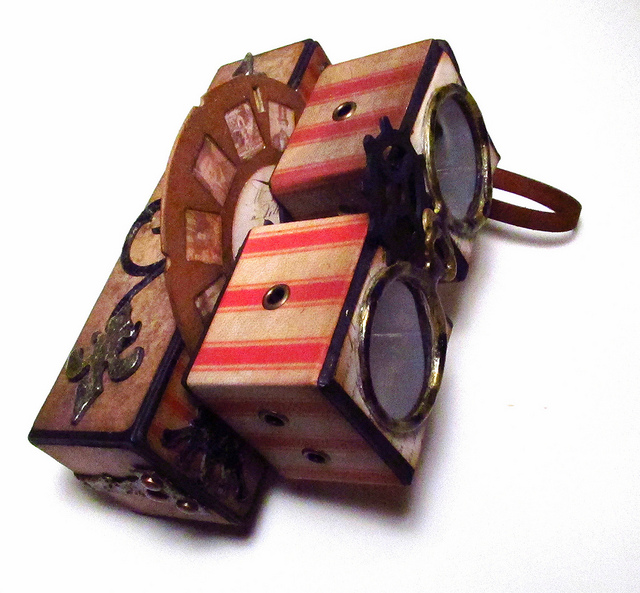 Well That's all the project folks!....Off to download more pictures and throw some things to wash...Be back in a bit with Part 2...

Thanks for coming by to visit!

Pin It
Posted by The Gentleman Crafter at 10:54 AM